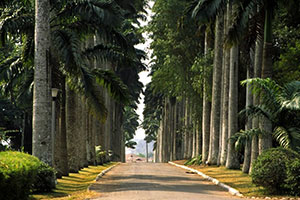 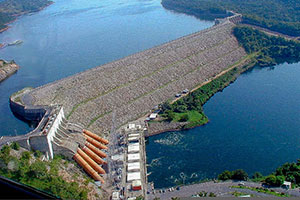 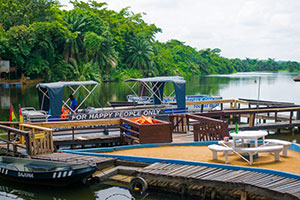 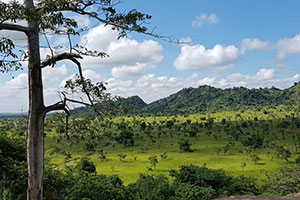 The Eastern Region occupies a land area of 19,323 kilometers and constitutes 8.1 percent of the total land area of Ghana. It is the sixth largest region in terms of land area and the third highest in terms of population distribution in the country.

It lies between latitudes 1°30’ west and 0º30’ east. The Eastern Region offers a number of Ghana’s popular tourist attractions, highly diversified cultural and historic heritage and intriguing landscape of tropical forests.

The Region is dominated by the Volta Lake, one of the world’s largest man-made lakes and Akosombo Dam which is the main source of Ghana’s hydroelectric power and a cruise on the Volta Lake to Dodi Island.

The region exhibits cultural diversity at its best with its exquisite African queens popularly known as the “Koforidua Flowers” in the Region’s capital.

The Region’s proximity to Accra, the nation’s capital is a pulling factor for tourist making tour decisions to Ghana with the background of the development in infrastructure and social services. The fast opening of the Region has paved way for proliferation of banks and other financial institutions.

Even though there is a regular Beads Market, Eastern Region is noted to have the only Thursday Beads Market which draws Beads Sellers & Buyers the world over to the Region.

The least populated district is Asuogyaman with a population of 75,920 representing 3.6% of the region’s population.

• Peak Season- March to July • Minor Season- September to November
• The Dry seasons are normally between November – February and normally characterized by cold dry weather.
• Annual rainfall ranges between 1500 – 2000mm and 900 to 1300mm in the Savannah zones respectively. Humidity Fairly moderate between 65-95% Temperature Ranges from 22-30ºC Topography It is generally undulating with large stretches of flat land in the Afram Plains Relief Highlands include Kwahu Scarps (77.8m) Atiwa Atweredu – (720m), Akuapem Range – (450) Vegetation The region encompasses three main vegetation zones:
• Semi deciduous rainforest covering the Southern and Central portions of the Region.
• Transitional Savannah Zone covering the northern parts behind the Kwahu Scarps.
• Coastal Savannah, (Eastern fringes behind the Akuapem Range). Brief History of Koforidua Koforidua the Regional Capital of the Eastern Region was founded in 1875 by Akan migrants from Asanteman. The completion in 1923 of the Kumasi railway saw Koforidua become an important road and rail junction. Koforidua is one of the country’s oldest cocoa producing centers.

Etymology of Koforidua Oral tradition has it that, Koforidua owes its name to an Akan man, Kofi Ofori, who had built his hut under a huge mahogany tree. This tree provided shelter for weary farmers and hunters after a hard day’s work. Overtime, it became common for farmers to say that they were going to rest under Kofi Ofori’s tree. In Akan, the translation for tree is ‘dua’ an amalgamation of ‘Kofi Ofori’s and the tree’ therefore became ‘Koforidua’.

Boundaries The region shares common boundaries on the North with Ashanti and Brong Ahafo Regions, on the East with Volta Region, on the West with Central and Greater Accra on the South.

Safety and Security All the security agencies consisting of the:

To augment these Agencies, there are also a number of Private Security Agencies maintaining law and order in both public and private places across the Region. These include private Security agencies such as:

Dodi is an island in Ghana, located 5 kilometers off the shore of Lake Volta. It is a tourist destination and a land place for the cruise ship, Dodi Princess.

The Dodi Princess ferries revelers from an embarkation point in Akosombo and cruises to the Dodi Island amidst musical funfair of life band on board, food and drinks. It has a swimming pool on board for both kids and adults.

It covers 8,502 square kilometers (3,283 sq. mi), which is 3.6% of Ghana’s land area. The Dam over the years has been a major destination for educational tourism especially for students.

From this small beginning grew our major cocoa industry. It is believed that a few of the original first trees planted by Tetteh Quarshie can still be found on the farm.

Aburi Botanic Gardens – Aburi The Aburi Botanic Garden is one of the most beautiful peaceful and fascinating places in the Eastern Region. The gardens is both an educational and aesthetic experience, research purpose with beautiful palm lined lanes and a wide variety of traditional, medicinal plants, including a silk cotton tree (Ceiba pentrandra) that is the sole survivor of the original forest that once covered the Aburi hills.

Tini Waterfalls – Adasawasi Tini Waterfall is located in a lush ever green forest about 6km from Adasawase, a small farming community of about 6km from Anyinam off the Accra-Kumasi highway in the Atiwa District of the Eastern region. The attraction consists of spectacular cascading waterfalls over a giant rock

Odweanoma Mountain at Atibie (Atibie Paragliding) Paragliding is a recreational and adventurous sport or activity of flying a paraglide, which essentially consist of a suspending rectangular wing connected to a harness (where the pilot of the paraglide sits) by suspending ropes.

The adventurous sporting has its launch pad (take off point) at the Odweanoma Mountains which is also host to a receptive facility and other adventurous attractions.

Odomankoma Ahenfie Rock Odomankoma Ahenfie Rock is a Tourist Attraction at Aboabo a village near Begoro in the Fanteakwa District. Odomankoma Rock is made up of rocks which are naturally carved into multiple types of shapes like oware, earthenware bowl, blackboard and other marvelous shapes which makes the site a very interesting place to be and has a serene environment.

The amazing part about the site is that a sick person gets healed after touching them, so with Odomankoma Ahenfie Rock one does not just enjoy the fascinating and artistic beauty of the rocks but also gets healed when a sick person touches them.

Begoro as they say has a fascinating side of the town aside it being the largest village in West Africa, it has a lot of tourist attractions that makes the town unique than other neighbouring towns.

Adjeikrom (the town was named after the founder Samuel Adjei) is located on the main Osiem-Begoro road, off the Koforidua-Kumasi highway in the Fanteakwa District. Tourists do go to Adjeikrom Cocoa Trail prominently for Cocoa Farm Tour, Village Tour and Mountain Hiking. Adjeikrom Cocoa Trail also plays a role in the production of cocoa in the Agricultural Industry.

Bruku Shrine which is located in Kwahu Tafo is a reserve deity among the people of Kwahu. In the olden days, most of the people where traditional worshippers who made pilgrimages to the shrine to pay homage.

There is a monument of a horse on top of the mountain which is created as a result of the activities of a compressing pressure on faults of bedrocks. Cocoa Research Institute Of Ghana Established in 1938 at Tafo, Cocoa Research Institute of Ghana investigates problems of diseases and pests which affect not only cocoa but other crops such as coffee and sheanut.

It also has a club house with recreational facilities, top of which is a standard eighteen (18) hole golf course.

Boti Falls Boti falls which is a twin water fall which is embedded at the heart of the Huhunya forest reserve. The fall is situated about 17km North-East of Koforidua. The falling of the water is seasonal in nature because of Climate change.

The fall is usually at its best from March to August which is the rainy seasons.

The Bunso Aboretum is home to different species of trees, butterflies and birds. This makes it lovely for visitors to have nature’s walk. Mobile swimming pool and bouncy castle are also available in the park during holidays and special programmes.

The canopy walkway which is the latest addition of adventure walkway to the parks is connected to six (6) trees including devil’s tree and Dahoma tree with five (5) platforms that reach the height of 35m and length of 210m.

This is biggest and accessible tree in West Africa. It is located at Asantemanso near Akim Oda in Esen – Epam Forest Reserve. An artificial forest has been planted to differentiate it from the existing natural forest.

The Region boasts of good accommodation units in the major towns ranging from luxury hotels, resorts and economy-class hotels. Catering There are very good restaurants in the Eastern Region serving both continental and local cuisines.

The Eastern Region is the only region with purpose built Highway Rest Stops along the major road that links the Southern part of the country to the Northern part down South (i.e. Accra – Kumasi). Strategically located at Bonsu junction and Nsutam.

The following are some major festivals and event attractions celebrated across the region:

Night life in the eastern region is awesome with numerous night clubs sited in most of the upscale hotels, open air restaurants and pubs who serve their patrons food and beverage amidst live band and spinning groups till day break. Tourists are sure to enjoy good live band music at affordable rates. Shopping Centers The region abounds with a wide variety of shopping centers in the Central Business District of the various districts in the region.

The Eastern Region currently does not have air – transport due to the unavailability of a local or international airport in the region. However, the transport system in the Eastern Region is efficient. The Eastern region has a fairly good transport system. One can easily connect to every part of the region and beyond. There are all categories of cars/ Lorries (Air conditioned and non-Air conditioned) connecting to and from the region. Connecting to the Northern Region of the country has been made easy by the provision of ferries on the Volta Lake as a means of water transport.

Most star rated Hotels have Conference and banquet facilities. Churches such as the Catholic, Methodist, Presbyterian and S.D.A also have conference / meeting facilities within the church premises of major branches in the region.